Researchers in Australia and the United States have shown that dPEG®-modified diabodies improve positron emission tomography (PET) imaging of tumors by reducing kidney uptake of diabody and extending diabody half-life in the bloodstream, which thus allows more diabody to be taken up by the tumor.1 These findings suggest that better tumor imaging can be achieved using less material, because more of the diabody that targets the tumor gets to the tumor and less of it is excreted by the kidney.

Tumor imaging in mammals requires matching blood clearance and tumor uptake with the half-life of the engineered antibody. Whole antibodies with molecular weights greater than 70,000 Daltons (abbreviated 70KDa) are blocked by the glomerular filtration barrier. Smaller antibodies have lower molecular weights; thus, they pass through the barrier into the kidney and are excreted. Whole antibodies, though, can be much more immunogenic than smaller antibody fragments, and the Fc region of a whole antibody can sometimes cause mis-targeting of antibodies. For this reason, antibody fragments are preferred over whole antibodies for applications such as tumor imaging.

Dimeric antibody fragments, known as “diabodies,” are designed single-chain Fv (scFv) fragments consisting  of a heavy chain variable domain (VH) connected to a light-chain variable domain (VL) by a peptide linker that is too short to permit the VH and VL fragments to associate with each other, thus forcing them to associate with complementary domains of another chain, creating two antigen binding sites. See the original paper here. For more information, see here (note: some of the information at this link is behind a paywall). Diabodies can be designed to be bivalent and bispecific. For reviews on bispecific antibodies click here, here, and here.

In this paper,1 diabodies against tumor-associated glycoprotein 72 (TAG-72) were used. TAG-72 is a mucin-like glycoprotein that is found on the surfaces of breast, ovarian, colon, and pancreatic cancer cells. The anti-TAG-72 diabodies that were studied clear rapidly from blood (t1/2=30-60 minutes), and they have good uptake by tumors expressing TAG-72, due in part to the bivalent nature of the diabodies. Because these diabodies have a molecular weight of about 50 KDa, they are also rapidly cleared (t1/2=12 hours) from the body through kidney uptake of the diabody, which is problematic for diagnostic imaging and therapeutic applications. If the diabodies could be kept from passing through the glomerular filtration barrier, they would stay in the bloodstream longer, thus giving them more time to find and bind tumor-associated TAG-72. (Please click here for more information on glomerular filtration.)

One way to keep smaller molecules such as diabodies from passing through the glomerular filtration barrier is to increase the hydrodynamic volume of the molecule and, hence, increase the apparent molecular weight of the molecule. Molecules with molecular weights greater than 70KDa do not pass easily, if at all, through the barrier. PEGylation increases the hydrodynamic volume of peptides and proteins. (Click here for more information.) PEG molecules are amphiphilic, and in aqueous solution, PEG will hydrogen bond extensively with water, increasing the hydrodynamic volume and causing the molecule to which the PEG is attached to behave as if it is a molecule with a much higher molecular weight. This makes the PEGylated molecule much more difficult to remove from the body by glomerular filtration.

Diabodies Have Improved Biodistribution When dPEG®ylated

Research by Li Lin et. al., affiliated with Beckman Research Institute of City of Hope, Duarte, California and Avipep Pty Ltd. of Parkville Victoria, Australia shows that conjugating diabodies to discrete polyethylene glycol (dPEG®) derivatives increases the apparent molecular weight of the diabody disproportionately to the size of the dPEG® derivative, thus reducing kidney uptake of the diabody, without adversely affecting the tumor-to-blood (T/B) ratio of diabody. Starting with Quanta BioDesign’s Fmoc-NH-dPEG®n-COOH derivatives, Lin and coworkers synthesized DOTA-NH-PEGn-Cys-VS derivatives, where n=0, 12, 24, or 48 ethylene oxide repeats in the dPEG® linker (VS stands for vinyl sulfone). The synthetic scheme is shown in Figure 1. 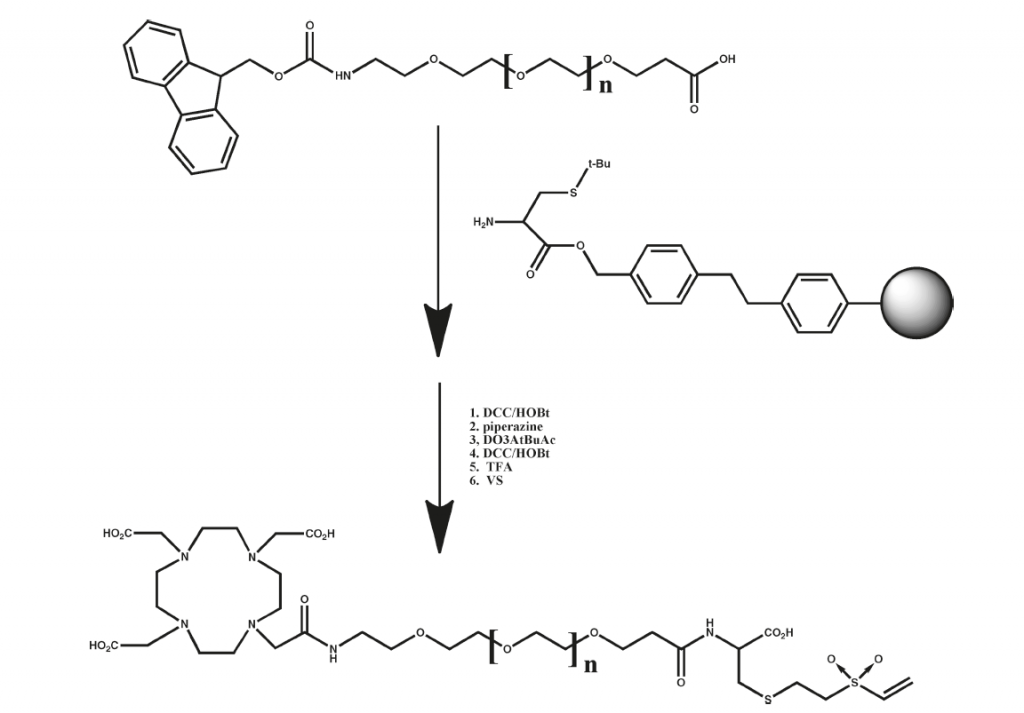 These compounds were then site-specifically conjugated to an anti-TAG-72 diabody that had been engineered to have a surface disulfide moiety that could be reduced to form a free thiol for conjugation. Using 111In labeling of the DOTA-PEG constructs, the biodistribution of the derivatived diabodies was mapped in athymic mice. The results (see Figure 2, below) showed that as the PEG linker increased in length the rate of kidney uptake and blood clearance of the diabody decreased, while at the same time the amount of labeled diabody on the tumor increased. With the n=0 construct conjugated to the anti-TAG-72 diabody, the apparent molecular weight of the diabody was about 50KDa, and the blood clearance half-life was 30 minutes. With increasing PEG linker length, the apparent molecular weight of the diabodies (as determined by size exclusion chromatography) increased to  60kDa (n=12), 70kDa (n=24), and 80kDa (n=48). For the largest (n=48) derivative, the blood clearance half-life had increased to 6 hours. This increase in apparent molecular weight was much larger than the weight of the linker added to the diabody.

Labeling the DOTA-NH-PEGn-Cys-avibody derivatives with 64Cu (half life of 12 hours), the researchers used positron emission tomography (PET) to image tumors expressing TAG-72 antigen in athymic mice at different time points. The results are shown in Figure 3.

Figure 2 shows that as the dPEG® linker length grows from 0 to 48 tumor uptake increases by approximately 20%, while the kidney uptake drops by about 90%. Figure 3 provides visual imaging of tumors within the test animals using 64Cu-labeled DOTA. It is clear that as the dPEG® increases, the kidney uptake decreases, and the tumor uptake increases.  The authors note, however, that the T/B ratios of the n=48 conjugate vary and are not ideal for imaging. One way to possibly avoid this problem is to have more than one DOTA on the dPEG® itself. Figure 4 shows one of our novel side-arm loaded dPEG® constructs using a tyrosine core. This could prove useful for conjugating more than one DOTA and one diabody onto the dPEG®.

One of the interesting findings in this paper is that the authors of this paper were able to achieve a large effect (an increase of hydrodynamic volume equivalent to a 30KDa increase in mass) with a relatively small PEG linker (48 ethylene oxide units is about 2.1KDa). Moreover, the linker used is a discrete molecule, not a dispersed polymer with mixture of sizes, nor a monodispersed molecule that was purified out of a dispersed mixture. With Quanta BioDesign’s technology, we synthesize discrete PEG molecules starting with very high purity materials and build the linker in progressive steps. A dPEG® provides increased water solubility, greater hydrodynamic volume, decreased immunogenicity, ease of characterization (because it is a single molecule, not a mixture), prevention of aggregation, longer circulation time in the body, and so forth. The disadvantages of polymer PEGs, including difficulty characterizing the final product from a dispersed mixture of sizes and tremendous loss of activity when very large PEGs are attached to small molecules, proteins, or peptides, are not found in dPEG® products.

Quanta BioDesign invented dPEG® technology, and with it, we are reinventing PEGylation. We are always creating new dPEG® constructs. In addition, if you look through our catalog and do not see what you want, we can synthesize the dPEG® construct specific to your needs. You can also call or E-mail us with any questions that you may have about our products!

Ian Hotham, B.S., received his Bachelor of Science degree in Chemistry from The Pennsylvania State University in Spring of 2013. Ian is a Process Development Chemist involved in synthesizing new dPEG® and in improving and scaling up synthetic processes. You can connect with Ian on LinkedIn at www.linkedin.com/pub/ian-hotham/51/b28/a08