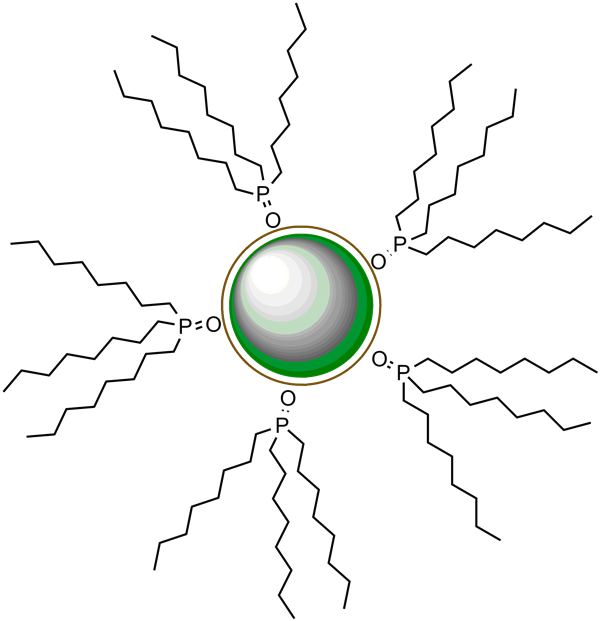 What about Quantum Dots?

Let’s start with a quick refresher. Quantum dots are cool nano particles, less than 10 nm in diameter, made of a semiconductor alloy core and coated with a shell of a different alloy, which fluoresce at different wavelengths depending on their size and specific composition. The smaller the quantum dot, the more blue-shifted its emission wavelength while larger quantum dots (6 nm and larger) shift to red and near-IR. Quantum dots can be a good alternative to organic dyes since they have broad excitation spectra (absorb energy at a wide range of wavelengths), narrow emission spectra (emit a fairly specific wavelength), and don’t suffer from photobleaching (degradation due to light intensity/oxidizing agents).

Water solubility is one of the major hurdles that must be overcome when producing quantum dots for biological applications. A standard method of making quantum dots involves injecting solutions of the semiconductor metals into hot (>300°C) organic solvent such as octadecene, and allowing the metals to nucleate (the first step of crystallization) and form alloys. Commonly used alloys are CdSe, CdTe, InP for emission wavelengths of 470-720nm and PbS and PbSe for >900nm. The reaction time is directly related to the size of the resulting quantum dots. When the quantum dots have reached their desired size, the surface is coated (modified) so that they are easily isolated. Originally this was done using tri-n-octylphosphine oxide (TOPO) which results in a very hydrophobic quantum dot (Figure 1).

At this point, the TOPO must be replaced with a water soluble group or more hydrophilic group (this is where dPEG® comes in handy). The TOPO is commonly replaced by a thiol containing linker such as 2-mercaptoacetic acid, lipoic acid (also known as thioctic acid), 2-mercaptoethylamine (2-MEA), or cystamine. These compounds are shown in Figure 2.

While these modifications allow for increased hydrophilicity, the water solubility can be increased even more by adding a dPEG® to the acid or amine end by a simple coupling using 1-Ethyl-3-(3-dimethylaminopropyl)carbodiimide (EDC). Alternatively, a thiol-dPEG® could also be used directly on the surface of the quantum dot. Figure 3 shows dPEG® compounds attached to a quantum dot either directly (as one of Quanta BioDesign’s thiol or lipoamide products) or coupled to a thiol monomer already on the surface.

The YouTube video below was published by CEN Online in 2011 and is about seven and one-half minutes long. It demonstrates how quantum dots are made.

Elizabeth L. Bentzen, et al., working in the lab of Sandra J. Rosenthal at Vanderbilt University, studied the effects of PEG on nonspecific binding associated with quantum dots and found that PEG as small as PEG350 (approximately dPEG®8), when coated over the surface of quantum dots can reduce nonspecific binding in certain cells. The results showed that, in the cells studied, the PEG length could possibly be shortened to 12 units without increasing the nonspecific binding. Using a dPEG® in place of a traditional polydispersed PEG gives the advantages of lot-to-lot reproducibility, as well as confident identification of final product.

See all of our metal surface modification dPEG® reagents here. For the products referenced in the caption to Figure 2, above, click on the links below:

Blog
dPEG®, AQuora®, Q-Bright®, AQ®, Q-Link®, and Q-Tag® are all registered trademarks of Quanta BioDesign, Ltd.
Copyright Quanta BioDesign, Ltd. 2022 - All Rights Reserved
Back To Top
We use cookies on our website to give you the most relevant experience by remembering your preferences and repeat visits. By clicking “Accept”, you consent to the use of ALL the cookies.
Do not sell my personal information.
Cookie settingsACCEPT
Privacy & Cookies Policy