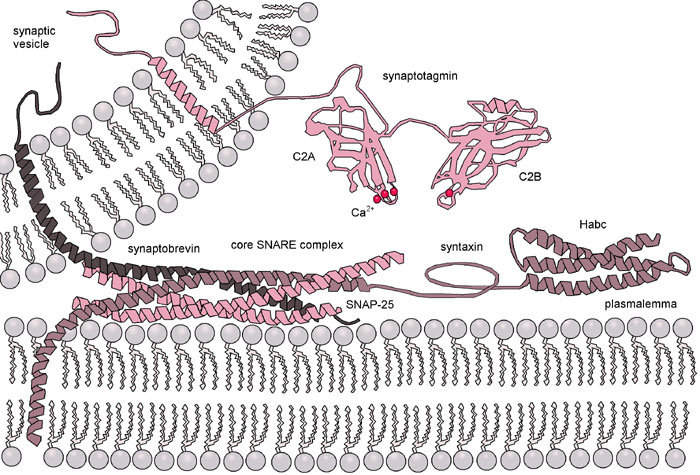 Membrane fusion is a universal process in living organisms and is critical to proper cellular function. Examples of membrane fusion events include exocytosis, fertilization, envelopment of infecting viruses, and transport of proteins through the Golgi stack. Though essential, membrane fusion is not spontaneous because free energy is required to overcome steric hindrances, electrostatic repulsions, and hydration shells between two membranes as they move toward each other prior to fusion.

In cells membrane fusion is facilitated by a protein superfamily known as SNARE (for Soluble N-ethylmaleimide-sensitive-factor Attachment Receptor), of which there are 36 members in humans. The best studied SNARE-mediated membrane fusion process is exocytosis in neural cells. Indeed, the first proteins of the human SNARE family to be identified were synaptobrevin, syntaxin, and synaptosome-associated protein 25 (SNAP-25). Figure 1 shows a SNARE-mediated exocytosis.

Most of the targeted SNARE mimetic systems discussed in the review consist of a lipophilic anchor (cholesterol, POPE, and DOPE are discussed), a flexible linker, and a recognition sequence. The flexible linker most often used is a PEG linker, typically a PEG12, though PEG3 has also been used. The purpose of the PEG linker is to site the recognition sequence away from the lipid membrane but to maintain flexibility so that the recognition sequence can move freely in space until it pairs with its target sequence. Example systems using Quanta BioDesign's dPEG®12 linkers (most notably PN10283, Fmoc-N-amido-dPEG®12-acid) have been discussed in Part 1 and Part 2 of this series.

How dPEG® Can Help You

Quanta BioDesign's dPEG® linkers provide the traditional advantages of PEG (water solubility, low immunogenicity, reduced aggregation and precipitation of proteins) but with a critical difference. Traditional PEGs are dispersed, but Quanta BioDesign's patented dPEG® constructs are discrete molecules. Constructs made from dispersed PEGs confound analysis because of the intrinsic heterogeneity of the PEG. Each of Quanta BioDesign's dPEG® constructs is a single molecular entity. There is no range of linker sizes or molecular weights. Thus, products made from dPEG® are well-defined, easily characterized, and amenable to standard analytical techniques.

Whether you are studying SNARE protein-mediated membrane fusion, building a new drug delivery platform, or creating a new peptide or protein drug, if you need PEG, then you need dPEG®. Quanta BioDesign invented and patented the dPEG® construct, and we manufacture our products in the United States.

Part 1: A Reduced SNARE Model for Membrane Fusion The cells of all living things…

Blog
dPEG®, AQuora®, Q-Bright®, AQ®, Q-Link®, and Q-Tag® are all registered trademarks of Quanta BioDesign, Ltd.
Copyright Quanta BioDesign, Ltd. 2022 - All Rights Reserved
Back To Top
We use cookies on our website to give you the most relevant experience by remembering your preferences and repeat visits. By clicking “Accept”, you consent to the use of ALL the cookies.
Do not sell my personal information.
Cookie settingsACCEPT
Privacy & Cookies Policy

This website uses cookies to improve your experience while you navigate through the website. Out of these cookies, the cookies that are categorized as necessary are stored on your browser as they are essential for the working of basic functionalities of the website. We also use third-party cookies that help us analyze and understand how you use this website. These cookies will be stored in your browser only with your consent. You also have the option to opt-out of these cookies. But opting out of some of these cookies may have an effect on your browsing experience.
Necessary Always Enabled
Necessary cookies are absolutely essential for the website to function properly. This category only includes cookies that ensures basic functionalities and security features of the website. These cookies do not store any personal information.
Non-necessary
Any cookies that may not be particularly necessary for the website to function and is used specifically to collect user personal data via analytics, ads, other embedded contents are termed as non-necessary cookies. It is mandatory to procure user consent prior to running these cookies on your website.
SAVE & ACCEPT
We will be closed Monday, July 4th in observance of Independence Day
Learn more
This is default text for notification bar
Learn more