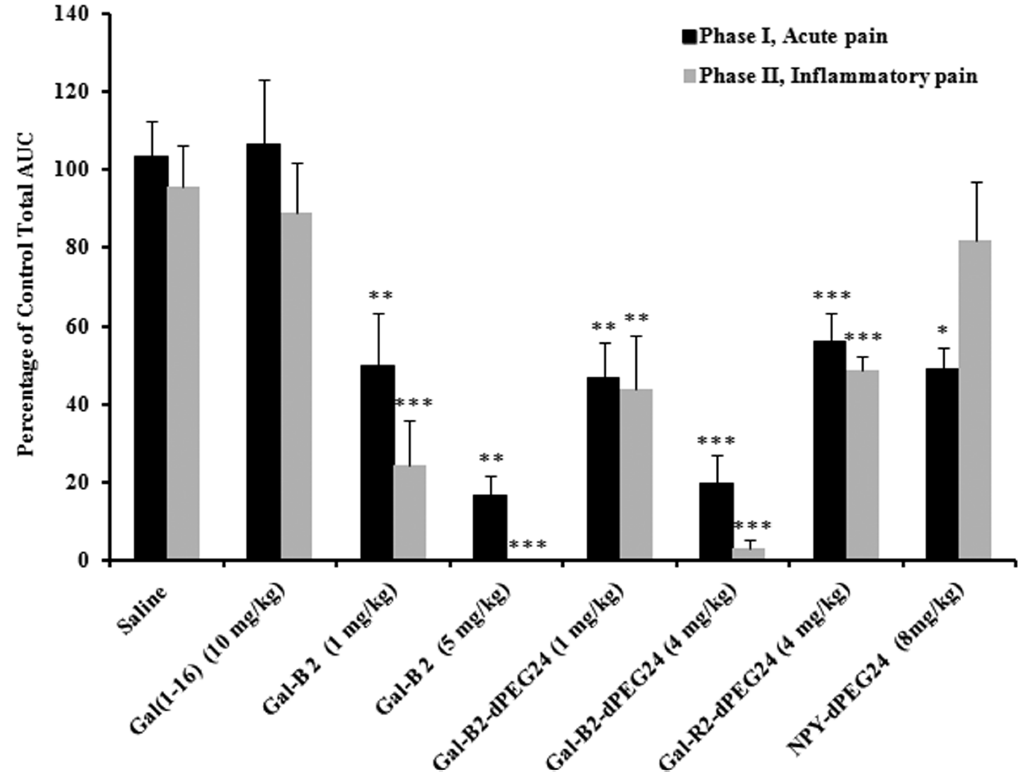 Galanin is a naturally occurring neuropeptide in the human body that facilitates communication between cells to balance a myriad of physiological functions. Neuropeptides are biosynthesized molecules used by the human body for everything from neurogenesis to cell communication.  Galanin’s main receptor sites reside in the central nervous system (CNS), and it normally crosses the blood brain barrier; however, the peripheral nervous system (PNS) also reacts directly to galanin and its receptors in sites of pain mediation.1 Galanin’s role as a pain inhibitor is a peripheral one, which means that, as a drug, its analgesic role would be secondary.  Peripheral effects of peptides are overshadowed by their effectiveness in carrying out primary functions and limiting concentration in low receptor site areas. Peripheral roles of neuropeptides can play just as important of a role as the primary roles in regulating changes in the nervous system.

Common methods of altering drug permeability include lipidization, counterionization, poly-disperse PEGylation, carrier protein conjugation, and many more. The modification is a means to justify an end, in this case the efficacy of the drug. A research team from the University of Utah’s College of Pharmacology and Toxicology and NeuroAdjuvants, Inc., in Salt Lake City studied PEGylation of galanin in response to their research done on other methods of alteration to the neuropeptide. Results of previous research by the group showed increased penetration across the blood brain barrier by galanin. The analgesic properties of galanin are restricted when allowed to permeate unrestricted from blood to brain. The group hypothesized that “dPEGylation will restrict penetration of the neuropeptide analogues into the brain, while their activities in the PNS would be retained”2.

Figure 2 shows data for the availability of an altered galanin (Gal-B2) with a discrete PEG in solution between octane and water2. The data shows that the PEGylated Gal-B2 favors the aqueous phase instead, which hypothetically limits its permeability across the blood brain barrier.
The testing of the peptides was carried out by studying the effects both in vitro and in vivo testing methods. The in vitro method included testing the effectiveness of the peptide to bind to its receptor by measuring fluorescence in a competitive binding assay. After PEGylation the neuropeptides retained nanomolar affinities for their receptor sites2. The in vivo testing included formalin injections into the dermal layer of mice paws to trigger a pain response. The mouse’s response to the pain, quantified by licking the wound, was compared across a series of unmodified and modified peptides and a control.

Figures 3 and 4 show some surprising results relative to the group's hypothesis. The PEGylated peptide retained similar analgesic activity as the unmodified peptide for acute pain (Figure 3, phase I), and was better than the unmodified peptide in controlling inflammatory pain (Figure 3, phase II). Figure 4 shows that the PEGylated peptides (Gal-B2-dPEG24 and Gal-R2-dPEG24) had reduced anticonvulsant protective effects when administered to mice via intracerebroventricular (icv) injections and had no anticonvulsant protective effects when administered via intraperitoneal (ip) injections. This is most clearly shown by comparing the area under the curve (AUC) of the unmodified Gal-B2 against the AUC of each modified peptide.

This research is significant in that it shows that PEGylation of a biologically active peptide can change both the biodistribution and bioactivity profile of the peptide. This gives promise for “further exploration of monodisperse oligoethyleneglycol residues toward more neuroactive peptides that mediate their actions in the central and peripheral nervous systems”2. As research into this field continues, access to high quality, diverse PEGylation reagents will be a cornerstone.

Our Role in This Research

In this research the role of discrete PEG was important, because polydisperse PEGylation forms a diverse array of peptides3. Quanta BioDesign's patented discrete PEG (dPEG®) technology produces PEGylation reagents that are single molecules, not an intractable mixture of different PEG linker lengths each with a different molecular weight. Using our m-dPEG®24-acid reagent to modify Gal-B2 through a lysine side chain resulted in specific single molecules (Gal-B2-dPEG24 and Gal-R2-dPEG24) that could be fully characterized.

An amide bond between the dPEG® and the peptide was the end goal and we offer myriad products with free acids, active esters, and amines to help create that bond. To create other types of linkages, we offer products with different functional groups, including hydrazides (to form hydrazone bonds), oxyamines (oxime bonds), aldehydes (secondary amines, oximes), thiols (disulfides), and many more. In addition to our linear dPEG® products, Quanta Biodesign also offers dPEG® reagents with multiple arms to better modify your small molecule, peptide, or protein without the cost of extra reaction sites.

References on Galanin and PEGylation:

m-dPEG®24-acid (used in this study to modify galanin)